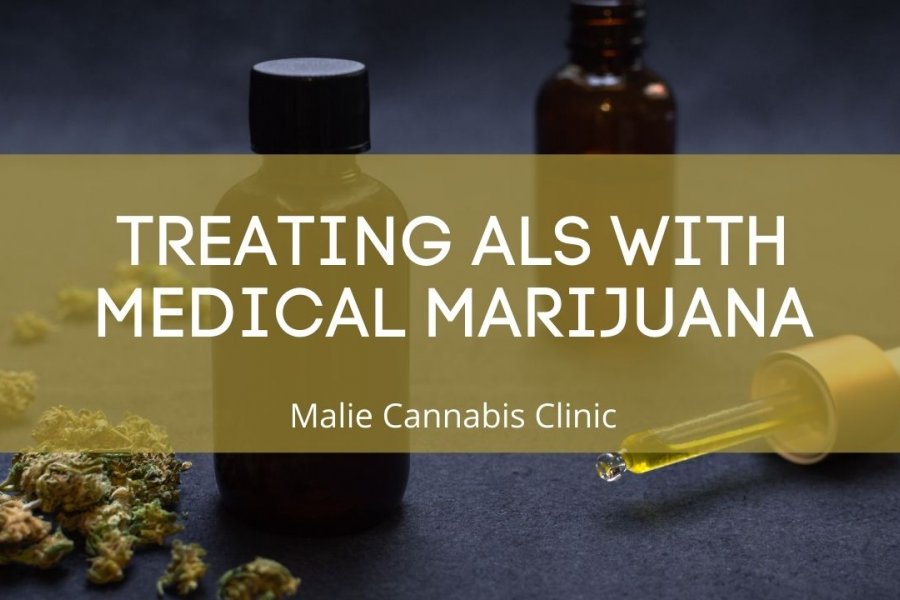 As many as 30,000 in the United States have ALS, and an estimated 6,000 are diagnosed with the disease annually.

Currently, there is no known cure for ALS. That said, evidence suggests that certain factors contribute to the development of the disease. Such factors include environment and genetics.

Medical marijuana has been found to considerably improve the quality of life of a patient. Many of the symptoms experienced by ALS patients, such as muscle plasticity, have been approved for medical marijuana treatment.

In this guide, you’ll learn more about how medical marijuana can make a difference for patients with ALS.

How Does Amyotrophic Lateral Sclerosis interfere with a Patient’s Body Function?

ALS is a neurodegenerative disease that affects the body by killing nerve skills in the brain and spinal code, effectively causing loss of muscle control.

When a patient losses muscle control, all types of movements can get hindered including the ability to swallow, talk and breathe. In severe cases, a patient can experience paralysis and ultimately death.

How Many Types of Amyotrophic Lateral Sclerosis Exist?

Three known types of ALS exist, sporadic, familial, and Guamanian. Regardless of the type of ALS, though, the treatment plan is generally the same. Knowledge of the ALS type only helps doctors understand the development of the disorder.

Sporadic ALS is the most common form of the disease in the United States. It occurs randomly, without any known cause, and there is usually no genetic association. Normally, people with sporadic ALS develop features of the condition in their late 50s or early 60s.

Only a small proportion of people with the disease (5- to10%) have familial ALS. The age of onset of people with familial ALS is widely reported as being about 10 years younger than those with sporadic ALS. So, that would be between a person's late 40s to early 50s.

The highest rate was experienced in the 1950s in Guam. In recent years, however, the rates of incidences have markedly declined.

What are the Common Symptoms of Amyotrophic Lateral Sclerosis?

Physicians have yet to determine exactly why ALS occurs. What they do know, are the symptoms that develop in patients diagnosed with the disease. They are as follows:

What Does Research on Medical Cannabis for Amyotrophic Lateral Sclerosis Say?

Multiple studies have shown that medical marijuana can help relieve symptoms caused by ALS. However, research remains difficult for doctors, as marijuana is still considered a Schedule I drug under federal law.

According to a review done by the American Journal of Hospice and Palliative Care, they found that marijuana can help ALS patients manage some symptoms like sleep problems and appetite. The research also suggested that marijuana can reduce inflammation, offer protection to the brain, and also act as an antioxidant.

The same review also found that cannabis has the potential to serve the same purpose as pharmaceuticals in both developments and on the market. Prescription drugs usually work by improving the functioning of cells and transmissions in the brain. All these help to protect the spinal cord.

Medical marijuana can provide a similar service, with fewer harmful side effects than what comes with prescription drugs.

Another study was done by the California Pacific Medical Center also shows that medical marijuana can help alleviate symptoms in ALS patients. In particular, tetrahydrocannabinol (THC), a marijuana compound, was found to slow the progression of ALS in a patient’s body.

To sum, research on medical marijuana treatments for ALS is promising. As more and more states continue to legalize marijuana, researchers will increasingly have the resources to conduct comprehensive studies.

How Can Medical Cannabis Improve the Quality of Life of an ALS Patient?

Another symptom experienced by ALS patients is chronic pain. While painkillers can work, their side effects can be harmful to your overall health. Medical cannabis is an increasingly popular alternative to traditional pain-relieving medications, such as opioids.

Other symptoms medical cannabis can help alleviate in ALS patients include reduced appetite and outbursts.

What is the Medical Marijuana Treatment Methods for Patients Suffering from ALS?

While smoking is undoubtedly popular means of consumption, there is more than meets the eye. Other ways of consuming medical marijuana include edibles and tropicals.

Based on your condition, your doctor is the only person who can decide the best treatment option.

So, can medical marijuana help treat ALS? Absolutely! Multiple studies have shown that it can help alleviate some symptoms experienced by ALS patients. Get in touch with your doctor to learn about the best medical cannabis treatment option.

If you would like to obtain a medical marijuana card in Hawaii contact the team at Malie Cannabis Clinic today!